Ukraine Day – by the Kyiv-based International Book Arsenal Festival, co-curated with the Cheltenham Literature Festival – was observed on 11 October, as a part of the UK/Ukraine Season of Culture produced by the British Council and the Ukrainian Institute. This year’s Cheltenham Literature Festival took place from 7 to 16 October in the UK’s north-western city of Cheltenham and presented a diverse programme of activities and events with leading figures of the world’s literary sector. Five events amplified the voice of the Ukrainian culture

As part of the Ukraine Day programme, Ukrainian writers, musicians, poets and illustrators held a series of events to inform the attendees about the modern poetry, music and visual arts scene of Ukraine. With all events sold out, the speakers were met with standing ovations, which further highlighted the urgency of Ukrainian voices to be heard even more widely in the context of the ongoing war.

“​​The Kyiv Book Arsenal curated a dazzling programme for a special Ukraine Day on 11 October at the Cheltenham Literature Festival which presented many different facets of Ukraine’s vibrant literary scene. The audiences at this, the UK’s oldest literature festival, found new insights into contemporary Ukrainian literature – and children’s book illustration! – but also compelling testimony from writers living and deeply implicated in these times of trial and defiance for their country. This collaboration between Kyiv Book Arsenal and the Festival took place within the framework of the UK/Ukraine Season, a celebration of cultural exchange which had been planned in partnership by the Ukrainian Institute and the British Council long before the February 2022 invasion but whose theme ‘Future Reimagined’ has taken on renewed and urgent relevance since then”, – said David Codling, UK/Ukraine Season Director and Volodymyr Sheiko, Director General, Ukrainian Institute.

Ukraine Day started with a conversation with renowned Ukrainian author Oksana Zabuzhko, moderated by British journalist Rosie Goldsmith. The interactive discussion offered fresh insights into how Oksana has been defending her country and its values through her writing and activism. 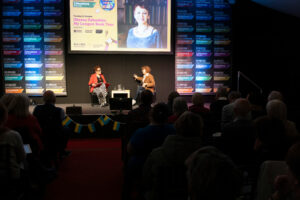 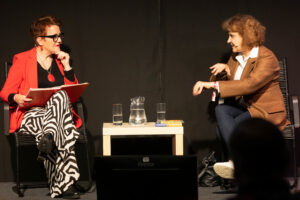 Oksana’s session was followed by a panel discussion on ‘When War Comes to Your Home’ between Ukrainian poet Lyuba Yakimchuk and the director of the Ukrainian Institute in London, Olesya Khromeychuk. They spoke about the role of literature and poetry during the ongoing war, how the conflict has affected their creative thinking and how culture can respond to aggression.

Speaking during the discussion, Olesya Khromeychuk said: “The participation of Ukrainian authors at the Cheltenham Literary Festival and the festival’s cooperation with the Ukrainian Book Arsenal demonstrate that the interest in Ukraine that appeared around the world because of the Russian war is now turning into a lasting relationship.” 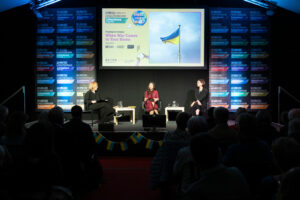 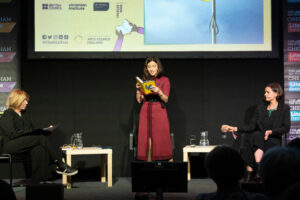 After the panel discussion, Ukrainian authors, designers and illustrators Andrii Lesiv and Romana Romanyshyn (Agrafka studio) hosted an art workshop for children and their parents. Under their supervision, children created and painted a canvas inspired by Agrafka’s book ‘How War Changed Rondo’ – the book tells the story of Rondo city in which live fragile and vulnerable creatures, made of glass, paper or air balloons. Beats that bite, rhymes that kill, poetry and music united as a weapon

Following the workshop, festival attendees saw a live music performance by Ukrainian musician and producer Yuriy Gurzhy, poets Grigory Semenchuk and Lyuba Yakimchuk and singer and writer Irena Karpa. They played soundtracks from their recent album ‘Songs of Love and Hate’, which seeks to tell the stories about what is happening in Ukraine during the war.

“Presenting Ukrainian Songs Of Love And Hate at the Cheltenham Literature Festival was an honour, but also a challenge for everyone involved in the project. While creating these songs, our goal was not only to find a language to talk about what Ukrainians had been going through lately but also make sure that this language is understood by those who are not necessarily following the events in Ukraine. Singing about flying missiles, people who lost their homes, describing what those sitting in a bomb shelter dream of – pop songs inspired by…a  war? Looking into the faces of people in the audience during our performance, hearing them singing along, seeing their reaction on October 11th made me believe we did a good job”, said Yuriy Gurzhy, the music producer, arranger and composer. 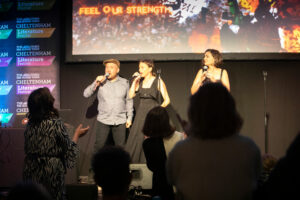 Ahead of her performance, Irena Karpa said: “It seems like these songs are going viral. And the fact that mothers put Bavovna [trans: Cotton] to their children as a lullaby is the best assessment of our work.“

Listen to the album here and read more about the project here. Coming to film festivals in Belfast, Brighton, Leeds and Cornwall, Ukrainian Films Month featured some of the best Ukrainian films of the year, as well as internationally recognised classics of Ukrainian cinema.

Four film festivals, the British premiere of Luxembourg, Luxembourg, contemporary films and the collection of the VUFKU. Ukrainian Films Month has passed in Great Britain.

The Ukrainian Institute's programme Transmission.ua: Drama on the Move was developed to support translations, promotion and production of modern Ukrainian drama in Europe. In 2020-2022, the focus is on Poland, Germany, and the United Kingdom.
The UK focus 'Transmission.UK' is implemented as part of the UK/Ukraine Season of Culture, with the support of the British Council, in cooperation with London's Royal Court Theatre and the Center for Contemporary Theatre of Birkbeck, University in London.

The first plans for a major cultural festival to take place alongside Eurovision have been announced and artists and creatives from all competing nations are encouraged to get involved.
It’s a little over a month since Liverpool was named as the 2023 host city for the Eurovision Song Contest, staging the global event on behalf of Ukraine.

Artists, Creatives and Dreamers – this is Liverpool Calling…